The following clip is now available in my clips4sale store:

Begging for Mistress Natalya Sadici’s whip has consequences. After merciless teasing while slave algo has been locked in chastity, She has him right where She wants him…breathing heavily, and ready to endure nearly anything for a chance of release. Mistress Natalya instantly cracks Her bullwhip against his reddened back. As he twists and moves around, She follows him with a variety of whip throws and lashes. She wants him crying out and turned into a pile of slave mush by the time She’s through with him today. Is there really a chance for release, or will Mistress Natalya continuously take out Her sadistic pleasure on his flesh? 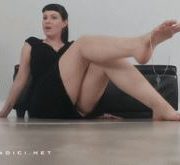 Broken Through Adjustment: The Hair Brush